This is a little larger. I'm trying to have a bit more space in these.
Sold

Posted by craigstephens at 8:38 PM 2 comments:

I haven't done too many still life paintings lately. The garden at school is overflowing with tomatoes and other stuff so I thought I'd try something a little larger. My students kept asking me what these three objects had to do with each other. It made me think about what we all bring to a painting. I've done so many paintings of these individual objects that I'm not really looking at them the same way as my students. When they see a tomato they see something you eat. When they see linseed oil they see a painting medium and to them, a feather is a part of a chicken. They tend to focus on what the thing is for or where it's from. When I selected these items I just saw a solid red organic mass, a semi-translucent amber artifact and something taller than the other two objects. I'm not really focusing on an item's purpose while I'm painting it. Putting several items together automatically creates some kind of narrative but the narrative isn't in the painting. It's in the viewer. I like that kind of interaction.

Posted by craigstephens at 8:40 AM 2 comments:

My wife and I helped hang the KVIE art auction last weekend and on the way back we decided to stop by the Elliot Fouts Gallery. I know a few people who show there and I had been meaning to get by to check it out. Elliot happened to be there and we had a nice conversation with him. He is a very approachable guy. The next Monday I saw him again at the KVIE preview party. He had looked at my website and although he liked the paintings he thought they were a bit dark. He asked me to stop by the following weekend with a selection of pieces so he could see them in person. I stopped by today and he liked what I brought by. I left a bunch of them there and signed a contract. A couple of hours later I received an email from him saying that he had already sold two pieces! I must say, I couldn't be happier. I am delighted to be a part of such a fine gallery.
Posted by craigstephens at 7:36 PM 5 comments:

I'll be showing a selection of landscape paintings at the Lake Forest Cafe in Folsom for the month of September. The Lake Forest makes great omelets and sandwiches and their coffee is great. If you're in the area I encourage you to stop by. Here are a couple of examples of how the paintings look framed. The El Cap painting is a larger version of my last post. The other one is a plein air piece that I did in Yosemite last weekend. It's Lower Cathedral Rock. 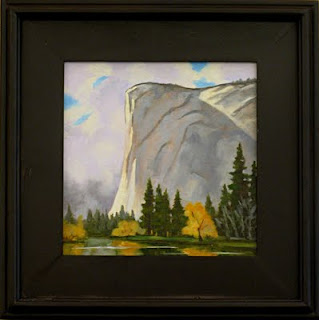 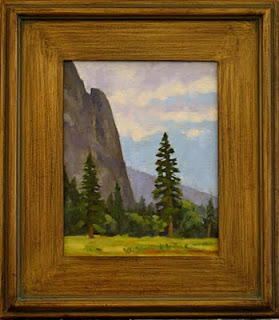 Posted by craigstephens at 10:11 AM 6 comments:

I did this little painting using some old black and white photos as reference. I don't usually paint from photos but I'm feeling a bit more confident lately and this was a fun exercise. Some friends of mine are heading down to Yosemite to hike Half Dome this Sunday and they invited me to tag along. I won't be doing the hike but I will be doing as much painting as I can get in while they're on the trail. It's going to be a long day but I'm really looking forward to it.

I have really laid off the posting lately. I will be showing a selection of recent landscapes at the Lake Forest Cafe in Folsom next month and I have been busy getting things finished and framed. I would encourage you to check out the show. The Lake Forest makes great omelets and the coffee is fantastic.

Posted by craigstephens at 8:10 PM No comments:

Posted by craigstephens at 6:42 PM 2 comments:

I got up pretty early to do this one. It was worth it. The sky was a great color and it wasn't hot yet.

Posted by craigstephens at 3:59 PM 5 comments:

Posted by craigstephens at 5:38 PM No comments:

I took a quick trip up to Serene Lakes this morning. There's a some great views up there. A flock of canadien Geese kept me company.

Posted by craigstephens at 8:34 PM No comments:

There are a bunch of big eucalyptus trees in the old power house park in Folsom.

Posted by craigstephens at 6:32 PM No comments:

craigstephens
I am an artist living in Northern California. In 1993 I graduated from U.C. Davis where I took classes from Wayne Thiebaud, Dave Hollowell and Roy DeForest. I currently teach high school art in Placer County California. On this blog I have posted 1000 paintings in as many days. I took a break from that strict schedule for a couple of years but since the beginning of 2014 I have been completing one small painting on a daily basis. The practice of completing a painting a day suits my disposition and aesthetic. I have also found that modeling this sort of daily practice for my students is important. I am making these paintings available on ebay. Thanks for stopping by and check back often if you like what you see.